Alaska, the rest of the story - Ninilchick Beach on the Kenai Peninsula - eagle bath time!

Ninilchick Beach, a spot we had heard was great for out of the way camping, but turned out that they no longer allowed camping on the beach.  So we went for a walk and saw an amazing sight!  Two adult eagles, maybe the parents, one of which was taking a bath in a river stream that led out to the ocean.  The other adult eagle was "standing guard" while they both summoned a young eagle to join them.  It was so cool watching this as we crouched low to the ground just on the other side of the flowing water.

Meanwhile, in the air, there were other young eagles that were "practicing or playing" their acrobatic mid air tricks and tumbles.  It was quite an afternoon of eagle entertainment!

Posted by George and Christy at 7:38 AM No comments:

Alaska, the rest of the story - Stariski campsite on the Kenai Peninsula - some of the most beautiful views we saw!

We wanted to check out Homer, AK, but we didn't want all the crowds - we found Stariski campground about 20 miles north.  We enjoyed several campfires with cocktails and coffee on a high bluff overlooking Cook Inlet.  Our view was amazing of Mount Redoubt, Mount Augustine, and Mount Iliamna!

Alaska, the rest of the story - Fairbanks - panning for gold and the Arctic Circle!

Arctic Circle, What?!?!  Yup, we took about a 12 hour bus ride, in one day, from Fairbanks to the Arctic Circle.  It really turned out much better than it sounds.  The bus was a comfortable "coach" with televisions that showed several short films about the Alaskan Pipeline and eco system of the Arctic Circle - it also helped that we had a great tour guide!

Posted by George and Christy at 10:06 AM No comments: 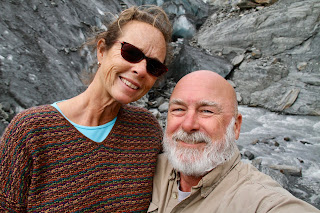 Posted by George and Christy at 10:05 AM No comments: